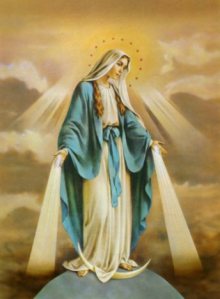 Mary Immaculate, pray for us.

Hope in This Difficult Time (by Pope Benedict XVI)

We are in need of hope “especially at this time which is so difficult for Italy, for Europe, and for various parts of the world”, Benedict XVI said, invoking the Blessed Virgin and asking her to help humanity “to see that there is a light beyond the thick fog in which reality seems to be enveloped”. The Holy Father was speaking to the throngs of the faithful of Rome who filled Piazza di Spagna on 8 December [2011] for the Pope’s traditional tribute and prayer to Mary Immaculate. This tradition dates back to 8 December 1857 when Pius IX first blessed her statue on the top of the pillar. Pius IX had pronounced and defined the Dogma of Mary’s Immaculate Conception in his Constitution “Ineffabilis Deus” of 8 December 1854. The Pope was accompanied by various Cardinals and, among the civil authorities, by the Mayor of Rome. The following is a translation of the Holy Father’s words given in Italian.

Every year the important Feast of Mary Immaculate invites us to meet here, in one of Rome’s most beautiful squares, to pay homage to her, the Mother of Christ and our Mother. I greet with affection all of you present here, as well as all those who are joining us via radio and television. I thank you for your unanimous support in my act of prayer.

Mary is portrayed, on the top of the pillar around which we have gathered, by a statue which, in part, recalls the passage from the Book of Revelation that has just been proclaimed: “And a great portent appeared in heaven, a woman clothed with the sun, with the moon under her feet, and on her head a crown of twelve stars” (Rev 12:1). What is the meaning of this image? It represents at the same time Our Lady and the Church.

First of all the “woman” of the Book of Revelation is Mary herself. She appears “clothed with the sun, that is, clothed with God: the Virgin Mary in fact is wholly surrounded by God’s light and lives in God. This symbol of her luminous garment clearly expresses a condition that concerns Mary’s whole being: she is “full of grace”, filled with God’s love. And “God is light”, St John says further (1 Jn 1:5). Here, therefore, the One who is “full of grace”, “the Immaculate One”, reflects in her whole person the light of the “sun” which is God.

This woman has under her feet the moon, a symbol of death and of mortality. Indeed Mary is fully associated with the victory of Jesus Christ, her Son, over sin and death; she is free from any shadow of death and totally filled with life. Just as death no longer has power over the risen Jesus (cf. Rom 6:9), so, through a grace and a rare privilege of Almighty God, Mary has left it behind her and gone beyond it. And this is manifest in the two great mysteries of her life: in the beginning, having been conceived without original sin, which is the mystery that we are celebrating today; and, at the end, being taken up body and soul into Heaven, into God’s glory. However, the whole of her earthly life was also a victory over death, because it was spent entirely at God’s service, in the unreserved sacrifice of herself to him and to her neighbour. For this reason Mary is in herself a hymn to life; she is the creature in whom Christ’s words have already come true: “I came that they may have life, and have it abundantly” (Jn 10:10).

In the vision of the Book of Revelation there is a further detail: upon the head of the woman clothed with the sun there is “a crown of twelve stars”. This sign symbolizes the 12 tribes of Israel and means that the Virgin Mary is at the centre of the People of God, of the entire communion of saints. And thus this image of the crown of 12 stars ushers us into the second great interpretation of the heavenly portent of the “woman clothed with the sun”: as well as representing Our Lady, this sign personifies the Church, the Christian community of all time. She is with child, in the sense that she is carrying Christ in her womb and must give birth to him in the world. This is the travail of the pilgrim
Church on earth which, amidst the consolations of God and the persecution of the world, must bring Jesus to men and women.

It is for this very reason, because she is carrying Jesus, that the Church comes up against the opposition of a ferocious adversary, represented in the apocalyptic vision by “a great red dragon” (Rev 12 :3) . This dragon sought in vain to, devour Jesus — the “male child”, destined to rule all the nations” (12:5) — because Jesus, through his death and resurrection, ascended to God and is seated on his throne. Therefore the dragon, defeated once and for all in Heaven, directly attacks the woman — the Church — in the wilderness of the world. However in every epoch the Church is sustained by the, light and strength of God who nourishes her in the desert with the bread of his Word and of the Holy Eucharist. And so it is that every tribulation, in all the trials she meets over time and in the different parts of the world the Church suffers persecution but turns out to be victorious. And in this very way the Christian community is her presence, the guarantee of God’s love against all the ideologies of hatred and selfishness.

The one threat of which the Church can and must be afraid is the sin of her members. Whereas Mary is indeed Immaculate, free from any stain of sin, the Church is holy but at the same time
she is blemished by our sins. This is why the People of God, on pilgrimage through time, addresses its heavenly Mother and asks for help; it asks her to accompany it on its journey of faith, to . encourage the commitment to Christian living and to support its hope. We are in need of this, especially at this time which is so difficult for Italy, for Europe, and for various parts of the world.
May Mary help us to see that there is a light beyond the blanket of thick fog in which reality seems to be enveloped. For this reason, we too, especially on this Feast, do not cease to ask her for help with filial trust: “O Mary, conceived without sin, pray for us who turn to you”. Ora pro nobis, intercede pro nobis ad Dominum Iesum Christum!